The relationship between the ‘nervous system’ within the heart and it’s system of ‘intelligent’ cells which carry information and memory is a network of over 40,000 neurons which cardiologists now know carries it’s own ‘blueprint’. The ‘Psycho-physiological Coherence’ of a human body is the harmony between Mind, Body and Emotions.

The heart beat produces an electrical current which is more powerful than the electricity in the brain. When this current in our body’s generator, the heart, falters or begins to over-work for a number of reasons often related to prolonged stress, fear, excessive exercise, etc. the neurotransmitter signals of the heart become out of ‘whack’, which in turn messes with the electrical signals of the heart.

Introducing and practising positive, loving, healthy emotional responses and relationships wherever possible on a daily basis brings the body’s vital processes back into harmony.

Once back in harmonious coherence, with the bodily processes working in a stable rhythm create the platform for the best possible balance in all of the body’s other systems as a whole.

This cohesion is not just generated by simple ‘relaxation’, as relaxation is a ‘low-energy state’. What we understand to be normal relaxation activities are really just the disengaging from cognitive and emotional processes, and do not necessarily create the coherence.

The practice of the technique that brings about this ‘whole-body and mind coherence’ improves energy, problem-solving, focus, performance and ability. Doing it regularly also improves co-ordination and more crystal-clear thinking.

Ideally, we would all be so much more productive in this more ‘coherent’ bodily state if we could maintain it for longer periods, which is why the daily practice is necessary. Throughout just one day we can be shoved around from pillar to post like a pinball in a machine whilst having to navigate our way around a multitude of external occurrences. Giving ourselves 3-5 minutes of ‘space’ a few times each day to realign means we are paying attention to the effect all of this ‘jostling’ has on us and our health.

So what is it?

The simplest way to get into this state of cohesion is very simple indeed – BREATHING!

A concentrated state of deeper breathing for a few minutes as many times a day as we can manage brings about this alignment or coherence:

Mini-meditations of concentrating on our breathing regulate:

It really is that easy. When the system becomes out of whack from an overload of environmental and emotional stimuli, all we need is the air that we breathe. The science of the heart tells us that the blood flow in the heart goes from the right atrium into the right ventricle, then through the lungs – and back into the left atrium and then the left ventricle of the heart. This continual process of blood flow throughout the heart pump as the heart beats in it’s normal rhythm is our life force. The fact that the lungs are an intrinsic part of this body regulation process is why the breathing practice is necessary as an important part of that regulation.

The heart itself is extremely intelligent in both memory and signalling. The ancient Egyptians discarded the brain after death as it was considered obsolete as an organ, but kept the heart as it contained essential ‘information’ for the next cycle of life.

The heart has the ability to learn and sense things, and is therefore a ‘thinking’ organ.

The heart also uses signals through hormones and neurotransmitters, so having to endure the sadness of a ‘broken heart’ really can stop the rest of the body functioning and cause significant alterations in hormone levels. If neurotransmitters are the cause of so many other physical and mental health ailments, then a ‘happy, harmonious, coherent heart’ really is the place to start to mend our general well-being.

One of the main hormones of the heart is Oxytocin, or the ‘love’ hormone. It is a ‘bonding’ hormone. Women produce significantly elevated amounts of oxytocin during childbirth to initiate the bonding with their newborn for it’s protection and nurture. The heart is the key component of the emotional system. This is why when someone we bonded with so closely leaves us or dies, the effect can be a ‘broken’ heart and the pain in our heart is excruciating.

The signals the heart sends out within the body’s electromagnetic field are very powerful and the ‘quality’ of those emotions dramatically affect our experience of things according to the memory imprint they create.

The heart is constantly responding to ‘logic’ orders from the brain, but what we do much less of in a very structured society of education, is use our own ‘intuition’. This intuition is allowing the ‘thinking’ of the heart to become more of a focus instead of just logic. Emotional intelligence comes from the heart and is the seat of intuition itself.

As the age old saying goes:

“I will let my heart rule, taking on board logical guidance only when necessary from my head!”

Therefore, when we allow negative emotions to be more prominent in our body systems, we effectively ‘cut short’ the connection with our heart, which in turn affects our ability to think clearly, remember things, to reason, learn and to make decisions. This would explain why we act impulsively and recklessly under stress, making decisions we wouldn’t normally’make.

We need to ‘live in our heart’ as it is the unity centre of consciousness. Regulating the balance of positive and negative signals from the heart to the brain is crucial to our all round physical and mental health, well-being, development and survival.

The brain is the centre of duality consciousness which we can understand by the way it is made, in two halves, or hemispheres.

If the heart is a single seat of consciousness, then it makes sense that maintaining it’s balance of positive and negative flow is essential in being the key to our ‘happiness’ state of existence.

The human existence ‘fell’ in it’s state of consciousness way before the time of the Ancient Egyptians. This ‘lower’ shift cannot be precisely calculated in time, but it is true to say that the Ancient Egyptians (and other ancient civilisations around the world) were aware that they were previously living in a much ‘higher’ state of conscious knowledge than we are at present. The ‘ending’ of the Mayan calendar cycle on December 21st 2012 at precisely 11:11am was said to mark the end of a 5125 year cycle, which would place it’s beginning at around 3100 BC. 2012 is also said to mark the end of a 26,000 year Procession of the Equinoxes cycle. The time in which we are currently living is therefore a very important ‘transitional’ period in which we are moving from very low frequencies to much higher frequencies that will eventually alter our state of ‘being’.

This would explain why technology and knowledge are ‘speeding-up’ and propelling us once again into the cycle of the ‘higher’ state of consciousness from previous ages. As depicted in the prophesies of the Kali-Yuga, the last of the 4 cycles of the Hindu ‘Yuga’, or eras, it means that from this ‘ending’ of the calendar, we have begun to move once again back to the Golden Age of Truth. The age we are in now would therefore be the transition between Kali-Yuga and Dwapara-Yuga, meaning ‘two-pair’ or ‘after two’.

When the earth’s consciousness fell, we as a planet became polarised and earth lost it’s connection to the ‘universal’ consciousness of unity. This long era of ‘being led by our brain’ is causing us to return in the ‘full-cycle’ back to the universal information of the heart, where unconditional love and unity will once again be dominant in our planetary consciousness. The heart cells themselves initiate the heartbeat through a process of depolarisation in the sinoatrial node (or SA node, sinus node) and it could be said that this is where the heart cells ‘become one’ in their operation. In spiritual terms the heart is the ‘gateway to the divine’ and we should all nurture it’s love and compassion – beginning with ourselves.

This notion of how our heart energy affects everything and everyone around us can be further scientifically studied with the ‘Torus’ effect of how electrical energy emanates and is reabsorbed in the human electromagnetic field. 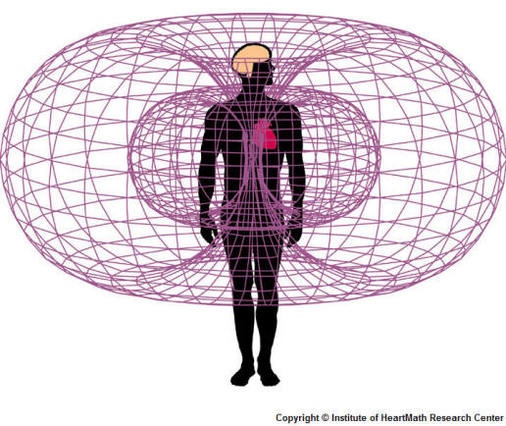 Being able to produce the electricity of positivity from within the body at the heart which then radiates outwards and increases it’s signal is much more significant than most people care to realise or understand.

We should all strive to make love the dominant frequency of our hearts. It brings us together harmoniously, both in mind and body and creates a powerful energy that is stronger than any other force. The ‘Flower of Life’ is based on this energy. Opening up the heart to all possibilities of true intention and healing can ‘tune-in’ to the purer levels of energy in the higher consciousness that defy ‘mind-over-matter’. We ALL have this potential within our human body systems, we just need to learn how to access and use it.

Spiritually dedicated to the improvement and wisdom of the journey :)

Join 57 other subscribers
Follow Good As New ~ Renewable You! on WordPress.com